It’s past mid-September. Summer is a mirage behind us. Back there – over my shoulder – are silvery skies, long walks by the sea and light evenings with family and friends.

Earlier this year I wrote two reflective essays about breast cancer in my family and about becoming breastless, and I edited the journals I’d written in 2006-7 (the time before, during and after my risk-reducing mastectomies). I also selected for publication more of Laura Stevens’ images, plus some of my own photos of the ‘before’ and ‘after’ plaster casts. I gathered all this material to sit alongside Self-portrait without Breasts (the central cycle of poems published in Excisions in 2011) to create a much extended version of Breastless (the Pighog pamphlet from 2011 is long out of print).

The entire Breastless project is now published online by the University of Sussex, as part of Life Writing Projects – a new collaboration between The Centre for Life History and Life Writing Research (CLHLWR) and REFRAME. Devised and edited by Professor Lyn Thomas and designed by Dr Tanya Kant, Life Writing Projects is launched today. I am honoured that Breastless is part of it. My thanks to Lyn for the invitation to publish – in one place for the first time – almost all the work around Self-portrait without Breasts. I have a joyous sense of completion! Online publication seems ideal for multimedia material and I am proud that such a harvest is now accessible alongside a rich and fascinating range of other life writing projects by Annie Ernaux, Jenni Cresswell, Katherine Collins, Louise Kenward, Nirmal Puwar, Tom Ottway, Tanya Shadrick and the wonderful Lyn Thomas herself. As the website says: ‘Life Writing Projects is about creative representations of lived experience that set their own rules rather than following the conventions of genres such as memoir or biography. The projects selected for publication all involve writing, but they may also explore the relationship between writing and photography, visual arts, film or video.’

The latest Springlines exhibition went up at Tunbridge Wells Museum & Art Gallery in early June (and continues for a few weeks yet, until 14th October). It is a privilege to have an exhibition up for several months – the work gets sort of settled in. Over the summer I’ve had opportunities to visit the gallery with colleagues and friends – and it has been intriguing to witness their experiences of the show. I see and read it with fresh eyes. By mid-October the Museum will have collected plenty of visitor feedback too. All this helps when it comes to thinking about the next Springlines exhibition at St Barbe Museum & Art Gallery, Lymington, from April to June 2018. Mary Anne and I are plotting autumn field trips to the New Forest, the Solent and the coast around Lymington – on the lookout again for hidden and mysterious bodies of water to inspire new pieces for the show at St Barbe, which will be as different from the Tunbridge Wells show as that one has been from Glyndebourne in 2015.

Since my residency at Fundacíon Valparaíso in February, when I started shaping Each Other (my second full collection of poetry) I’ve put that manuscript through several more rounds of editing. Six years have passed since Excisions came out, but what with CELL and Springlines (exhibitions and book) and the extended Breastless, and a few other things, I’ve been happy to let Each Other take its own time. The collection is almost ready for whatever will become of it next.

So there’s space in my life and in my head for new writing and I’m dreaming into a particular piece of work which has been hovering for a few years. I’m going tentatively, slow but sure, in a combination of research and pondering and patches of writing, because that’s what is needed at the moment. It feels like coaxing a bird down from the top of a tree to eat out of my hand. I must be alert and patient, and I must focus my energy. That’s how I’m coming to this autumn. 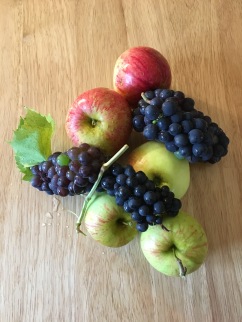