Our grown-up son is, for the moment, living alongside us in a small Studio that we converted from a garage a few months ago. The arrangement suits us all. He cycles to and from his two local jobs, he’s learning to drive, and as a musician he can make all the music he likes without worrying about the neighbours above or below (we built in plenty of sound insulation and ours is quite a spread-out village).

Our son lived away from home for four years, until recently, and is used to being self-sufficient. We share recipes, spices, chat, meals and walks when we want to, but we’ve found a comfortably boundaried way of being adult neighbours and neighbouring creatives. It seems to be working well. He goes away from time to time and so do I. He and his dad discuss music. The dog enjoys plenty of walks.

There’s just one thing my son regularly asks of me, and that’s to make sandwiches for his lunch at work. He only gets a short break and since he’s on his feet all day (and then often in the evening too, at his other job) he really needs nutritious food when he can get it. And in the morning – eating a bowl of cornflakes as he gets dressed – it isn’t easy for him to find the time to make lunch. 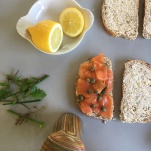 It is pure pleasure to make sandwiches for my son, and I’m so glad he asks me. I know the things he likes, but I also love surprising him. He brings home just-past-sell-by-date freebies from the day job deli and I combine these delicious hams or cheeses with herbs and salad from the garden, chutneys and mustards from the fridge. I wrap the sandwiches in foil and he tucks them into his backpack. Often he texts me to give a one-line critique of the day’s sarnies, and he always, always thanks me. He’s like that.

Our son arrived when I was 40. After fertility issues and two miscarriages we’d given up hope of having children, so the joy and the sense of gift were extraordinary. And then, in one of life’s characteristic conflations of major events, my mother was formally diagnosed with Alzheimer’s Disease when my baby son was a few weeks old.

My mother was only 71 and had already been unwell for some years; I could see what was coming even though my father refused to, but in January 1996 his denial crumbled in the face of medical confirmation of her illness. He asked for my help; I gave it. And in so doing, I also gave up most of my short maternity leave, a lot of sleep (rare enough anyway with a new life to care for!) and many longed-for calm days with my baby.

Two or three times a week I drove myself and my infant son down the A3 from London to Hampshire to take my mother to medical and therapeutic appointments, to meet carers or look after her when carers couldn’t be found, etc etc. But the stress and fatigue caused my milk supply to dry up, and when I weaned my son onto formula at twelve weeks, he developed eczema and the first of many severe allergies that were to plague him for years. Alongside my intense happiness and my gratitude for having him, I struggled with grief and guilt and regret. I also knew I had no option but to make sure that my mother got the care she needed, but would not have had without my help.

It was a difficult first year for my son, but he smiled throughout it. And when I had to find a care home for my mother eight months after her Alzheimer’s diagnosis, because my father was no longer coping, my bonny son used to come with me on my visits there. He’d smile at all the residents and they’d smile back.

So when I make sandwiches for him now, I’m doing what I couldn’t always do as singlemindedly as I’d have liked to, back then. This precious time with him living next door is a new gift. It’s as though some of my maternity leave, our maternity leave, has been handed back to us – 23 years later.

11 thoughts on “Motherhood, time and sandwiches”