This past week has been a rich time. I went to Cheltenham for two days of Medicine Unboxed over the weekend, and on Monday I spent an evening at St George’s, University of London, speaking at the first event in their new series ‘The Art of Medicine’.

I’m feeling increasingly comfortable and settled in this world of crossovers between the arts and medicine, around medics and writers who place narrative and voice at the centre of thinking about human illness and human wholeness. And that’s because the more I experience these places of meeting and exchange the more sense it makes. Things click into place.

The exciting programme at Medicine Unboxed (brainchild of Sam Guglani) themed this year on ‘Voice’, included talks on how people communicate in the operating theatre (not for the squeamish), how voices work together in psychoanalysis, an exploration of the meaning of hearing voices, riveting political debates between different voices within the arena of public health care, a presentation about the BBC’s Listening Project, and much much more. There were extraordinary performances in both sung and spoken voices. And there were all the conversations between delegates and speakers, off stage. Intriguing and inspiring.

Monday’s event at St George’s, University of London, was a happy continuation. The fabulous Deborah Bowman (who’d also taken part in a lively panel debate at Medicine Unboxed, championing the role of Medical – or, her preferred term – Healthcare Humanities in a truly interdisciplinary approach to medicine) had invited me to present ‘Self-portrait without Breasts’ for the new St George’s series ‘The Art of Medicine’. Deborah’s own beautifully concise talk on why stories matter in healthcare and medical education was exemplary: it was engaging, utterly convincing and amusing. Benjamin Woolley, the RLF Fellow at St George’s, then spoke about Joseph Wright of Derby’s painting ‘An Experiment upon a Bird in the Airpump’. Mesmerising. If only science had been taught that way when I was at school, I might have ended up a doctor!

It was a treat to present my own work in this context, to a mixed audience of medical students, medical educators, hospital staff, members of the public. Dr James Mackay from UCL, the genetic oncologist who has been such a great support to me for several years now, also spoke. I was very moved to hear him say that he didn’t think I needed supporting – that my poems and I speak eloquently without him. But as ever, his input on the science and significance of genetics was vital. I am deeply grateful to James for his role in the work I do. And a huge thank you to all at St George’s for the warm welcome and the gorgeous fruit. 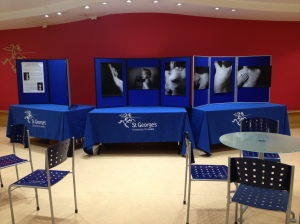